The mother of a boy born at 23 weeks has called for the abortion limit to be lowered as her son reaches his first birthday.

Harrison Dawson was born weighing just 1lb 4oz, but dropped even lower to 14oz in the week after he was born.

Writing in the Daily Mail, mum Syma told how her waters broke at 22 weeks and she was subsequently told she was developing sepsis and would have to give birth.

After Harrison was born, doctors initially said they had done all they could for him, but dad Seamus begged them to continue trying.

Harrison was subsequently transferred to St Thomas’ neonatal unit in London and his parents were told it would be a “rollercoaster” going forward.

Syma relayed how the next six months in intensive care included many health scares and infections which Harrison had to fight off. Among these were emergency bowel surgery, lung disease and a heart condition.

Harrison left hospital in September, returning home on oxygen support and with a feeding tube. Syma said: “Sometimes I felt more like a nurse than a mum.

“Now he no longer needs additional oxygen and I am so happy to see my little boy smile.”

She stressed: “After going through what we did, I agree the abortion threshold of 24 weeks needs to be revised.”

Last year, another mum shared how she refused to abort her daughter, despite facing pressure from doctors to do so throughout her pregnancy.

Meghan Elise Bell was told by medics at a routine ultrasound screening that her unborn child may have spina bifida and that she could be aborted any time up to birth if she desired.

She said: “The brutal truth of that argument broken down is: ‘Would you like to erase this baby and try again?’ What kind of a message is that in this society, where we seek to create equal opportunities, regardless of ability?” 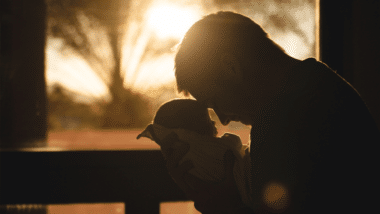 Premier league star: ‘My joy at daughter born at 24 weeks’