Dale was paid £4,000 plus costs from Cumbria Police in November 2019 in settlement after pursuing a claim for being wrongfully arrested and detained for six hours in July 2018.

The Christian Institute supported him and said the result was a positive outcome “for Christians across the country”.

Mr Mcalpine says he hopes his case will encourage others: “As long as you are reasonable in your preaching you should have nothing to fear from the police.”

The preacher, from Workington, Cumbria, was approached by three police officers in Kendal town centre in July 2018.

They arrested Dale and he was taken to Kendal Police Station, where he was held for questioning.

After being released without bail he was left in limbo for six months until the police eventually notified him that he would not be prosecuted.

The Christian Institute supported Dale in a claim against Cumbria Police for wrongful arrest and false imprisonment. Cumbria opted to settle his claim without going to court.

Mr Mcalpine has been a street preacher for nearly 15 years.

“I believe in the Lord Jesus Christ and His message of salvation and I want everyone to hear about it.

“I took this legal action to help the police realise you cannot arrest people just for preaching the Gospel.

I took this legal action to help the police realise you cannot arrest people just for preaching the Gospel. Dale Mcalpine

“This is a free country and I’m grateful for our freedoms. I’m also extremely grateful to The Christian Institute for helping me take a stand. I couldn’t have done it without them.”

Mr Mcalpine said he had decided to donate the £4,000 to The Christian Institute “so they can continue to help Christians to fight for religious liberty”

In 2010 Dale was involved in a similar case in which he was arrested and detained for almost eight hours after preaching in Workington town centre.

On that occasion he was awarded £7,000 plus costs from Cumbria Police following a claim of wrongful arrest, unlawful imprisonment and breach of his human rights.

Feeling insulted should not be a crime: Dale Mcalpine

Feeling insulted should not be a crime: Dale Mcalpine

Are Christians being marginalised in Britain?

Are Christians being marginalised in Britain? 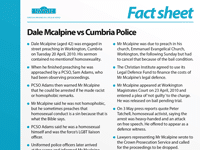 Read more about the issues associated with this case. 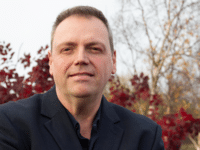