Kenneth Ferguson, Stirling Free Church (SFC), and the Billy Graham Evangelistic Association (BGEA) have all been successful in their separate legal actions against a multimillion-pound charitable trust for discriminating against them on grounds of religious belief.

In July 2021, an Employment Tribunal ruled Kenneth Ferguson was unfairly dismissed by The Robertson Trust and had been subjected to religious discrimination by the Trust and its Chairwoman, Shonaig Macpherson, for believing that marriage is exclusively between a man and woman. The Tribunal is yet to decide the level of damages in Mr Ferguson’s claim.

Then in December the same year, the Trust settled claims with SFC and the BGEA after it cancelled their bookings simply because they were for religious events. In the agreed settlement the Trust admitted it “acted unlawfully” and apologised to both organisations. It has also paid a substantial contribution towards legal costs.

All three cases were supported by The Christian Institute.

Stirling Free Church had made a £6,500-a-year agreement with The Robertson Trust for the use of its premises in The Barracks Conference Centre for its Sunday services. Kenneth Ferguson, the Trust’s CEO at the time and an elder of the church, declared his involvement in the church on the Trust’s register of interests and recused himself from all negotiations about the rental.

However, the Trust’s Chairwoman Shonaig Macpherson objected to the church’s use of the premises, reportedly because “they don’t believe in same-sex marriage”.

The church had its contract terminated and was ordered to leave, with the Trust claiming it had a policy of not renting for activities promoting religion. However, the church’s lawyers discovered that no such policy exists.

The Trust began disciplinary actions against Ferguson, and despite receiving glowing appraisals and growing the Trust substantially in his time there, he was dismissed, with the Trust citing vague ‘performance issues’.

Coverage from the BGEA 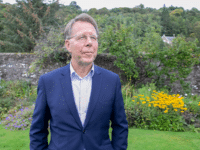