Prevent is part of the Government’s wider counter-terrorism strategy, aimed at stopping people being radicalised. Since 2011 it has been more focused on ‘non-violent extremism’. Prevent defines extremism as “vocal or active opposition to fundamental ‘British values’, including democracy, the rule of law, individual liberty and mutual respect and tolerance of different faiths and beliefs” – a definition that has been widely criticised.

In 2015, a Christian Institute-backed campaign won an important victory when the Government dropped the key section of Prevent guidance which threatened the free speech of university Christian Unions.

Draft guidance had said that university societies in Britain would be forced to hand over external speakers’ talks two weeks in advance for vetting. But the Government introduced an amendment which requires universities to give “particular regard” to freedom of speech when fulfilling their duty under Prevent.

However, concerns remain. Later in 2015, Radio 4 heard from a Prevent expert at Kirklees College who claimed voicing criticism of homosexuality “might be breaking the law”.

In 2017, Lucy Allan MP said children who attend protests against badger culling risk being reported to the Prevent programme. 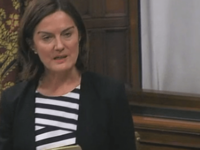 Kids who go to badger protests may be considered extremists

CUs will be safe from ‘anti-terror’ plans, Govt pledges

UCCF: Critics could censor CUs under Govt ‘anti-terror’ plans

Kids who go to badger protests may be considered extremists

CUs will be safe from ‘anti-terror’ plans, Govt pledges

UCCF: Critics could censor CUs under Govt ‘anti-terror’ plans