The mother of a baby born at 22 weeks has shared her delight at her daughter’s progress after they were able to return home together.

Sofia Viktoria Birina was born 18 weeks premature on 2 October, weighing a little over one pound and measuring just ten inches. She is believed to be one of the youngest surviving premature babies in Scotland.

Baby Sofia was allowed to go home with her parents earlier this month after what they described as “132 of the longest and scariest days” of their lives.

Her mother, Egija, told of how she initially feared her daughter would not survive, and the tiny baby spent the first three months of her life in an incubator.

Egija said: “Sofia was literally the size of a hand, so fragile and small and her skin was see-through. I had to wait a week to hold her for the first time because she was so fragile. Once I was able to hold her, they couldn’t get her out of my hands.”

Sofia overcame some early challenges, including a heart defect, underdeveloped lungs, bleeds on the brain, an eye disease and numerous infections.

“She was hooked up to lots of machines and she was ventilated for several weeks to help her breathe. First time they tried to get her to breathe on her own, she only lasted 20 minutes then her heart rate dropped and I felt like I was losing her”.

But Sofia survived, and now she is home, Egija said her daughter is “doing great”, adding that she has the “most beautiful smile on her face”.

The new mother also wanted to encourage others, saying: “To all other mummies going into such an early labour, there is hope. Never give up.”

“To all other mummies going into such an early labour, there is hope. Never give up.”

Sofia will require check-ups over her first few years, but hospital staff are confident she will improve.

In the UK it is legal to abort a child up to 24 weeks for most reasons.

Last year, another mother shared her joy at how their premature baby defied the odds to be allowed home.

Baby Mimi Marks weighed just 13oz when she was born at Monash Children’s Hospital at only 26 weeks, having to fight off several infections and chronic lung disease.

Her mother Nelma said: “It’s unbelievable to see. We are really, really grateful to Monash. I have no words to explain, it’s beyond happiness”. 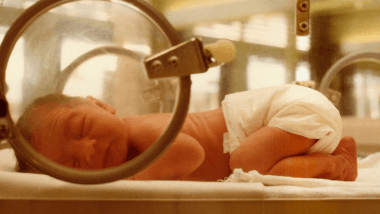 Baby born with hands smaller than a penny returns home