A couple who refused to abort one of their children to save the other have shared their joy that their two healthy boys are still thriving 17 months on.

Ashley and Kate Butcher were offered an abortion at 12 weeks, after doctors discovered their twin sons’ umbilical cords were tangled and they were sharing a placenta.

But Kate went on to give birth to both Arlen and Eivin via caesarean in August 2020 – weighing 4lbs 7oz and 4lbs 11oz respectively.

At the 12-week scan, the couple were told that the twisted cords could cut off oxygen and blood supply to each baby.

Dad Ashley said that there was “a 30-40 per cent chance that one or both of them wouldn’t make it”, but “there was no way that we were going to choose one of our babies over the other”.

The pair, who are both Scout leaders, also shared how the knot between both boys’ cords reminded them of the ‘friendship’ knot, giving them comfort at the “special bond they had in the womb”.

Arlen initially needed resuscitation, but he and Eivin have since gone from strength to strength.

Ashley told how the boys “have such a close bond” and that they “get up to all sorts of mischief together – they are a real tag team”.

The couple said they are looking forward to telling their sons the story of their birth when they are older. 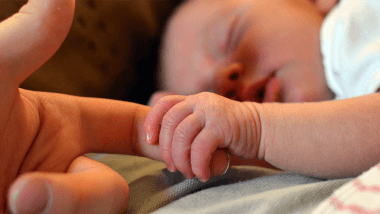