Outside organisations that deliver Relationships and Sex Education (RSE) should not be ‘hiding’ their resources from parents, members of the House of Lords have said.

During a House of Lords debate on the Schools Bill, Peers complained that parents were being denied the right to know what was being taught in RSE at their child’s school.

The Government promised to consider further the issue, but refused to support an amendment to ensure parents could view all school curriculum material.

Former Labour Education Secretary Baroness Morris of Yardley, who tabled the amendment, pointed out that Government guidance on RSE states that parents should be able to see what materials are being taught to their children.

Lady Morris said she had been surprised to learn of a mother who was denied access to curriculum materials being taught by an outside organisation on the grounds it was their “intellectual property” and could not be shown to “a third party”.

In RSE, she added: “There are so many areas where a parent would want to know what is being taught to a child, and something needs to be done about this.”

Crossbencher and former Director of Public Prosecutions Lord Macdonald of River Glaven co-sponsored the amendment, telling the House: “I entirely agree with the noble Baroness, Lady Morris of Yardley, that the present position is untenable.”

Conservative Peer Baroness Stroud said there was, “increasing evidence from parents that schools are using third-party teaching materials which are often ideologically motivated and lack factual basis, particularly in relation to some relationships and sex education materials, as well as other contentious issues”.

She also said schools have “a duty to provide these materials for parents to view and therefore this amendment is necessary in order to close that particular loophole in legislation.”

Crossbencher Lord Triesman said: “in schools a number of organisations have unwisely been allowed to capture the agenda, and the point is repeated ad nauseum about what you have to believe.

“Now, I do not mind people championing ideas — I have a go at it occasionally myself — and I do not mind everybody disagreeing with me; it happens to me all the time. But I do not like people being designated as the champion of things whose orthodoxy in those respects has to be adhered to. That is no basis for any kind of education — any kind at all.”

“It is not the sole responsibility — I shall mention an organisation — of Stonewall to tell me, my child or anybody else what the orthodoxy is about those questions.” 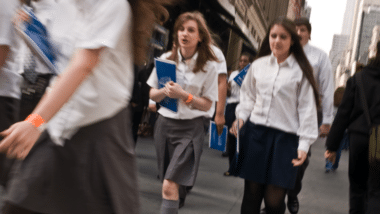 CI: ‘Ofsted should check schools comply with the actual law, not Stonewall Law’