Some NHS trusts are using policies which tell hospital staff to lie to women and put their safety at risk in order to appease males who say they are female, a whistleblower has revealed.

Such policies allow men who say they are women to be placed in female-only wards even if they have a history of sexually abusing women.

Dr Helyar explained that women who object to sharing a ward with a male-bodied patient are referred to in policies as “transphobic service users, offenders, perpetrators or those who should be given trans education sessions to improve their attitudes”.

Where women are expressing concern at a male patient being treated on a female-only ward, staff are also instructed to “re-iterate that the ward is indeed female only and that there are no men present”.

In a ‘best-practice guide’ produced by Nottinghamshire NHS Trust, staff are told they “should be very careful” about refusing to allow a transgender patient on a women’s ward, adding: “Just bear in mind you would be in more trouble for denying someone’s rights!”

The whistleblower explained that such guidance can “compromise nurses and prevent staff from speaking out, even when there are clear safeguarding concerns, and questioning any aspects will be perceived as anti-trans, with consequences including a disciplinary – and in some cases being charged with a criminal offence.

“One staff member in a trust had a formal complaint made against her.”

She added: “In one mental health trust, a male who identifies as a woman was placed on a female ward with observation. This patient complained that the observation was discriminatory, and it was removed.

“The patient went on to sexually assault two women patients. The same patient was placed on a female ward on a subsequent admission, and each time assaulted women. Staff concerns were ignored.” 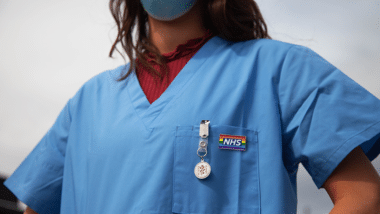