A new campaign has been launched today to protect the ordinary work of churches from an overly-broad ban on so-called ‘conversion therapy’.

Let Us Pray warns that a ban on prayer, preaching and pastoral advice – as proposed by many LGBT activists – would be in breach of international law.

Top human rights lawyer Jason Coppel QC has confirmed that criminalising the expression of mainstream Christian beliefs about traditional marriage would breach the Government’s obligations under the European Convention on Human Rights.

On its website, letuspray.uk, the campaign encourages “pseudo-medical abuses” to be tackled if they are occurring, but warns politicians to “be wary of activists exploiting concerns about abuse to further their own agendas against Christians”. 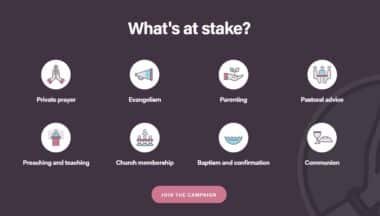 Campaign spokesman Simon Calvert said: “We simply want to protect the human rights of Christians to teach and practise their beliefs. A conversion therapy ban should target abuse, not prayer.

“The Let Us Pray campaign will be speaking up for ordinary churches and ordinary Christians who just want to get on with living out their faith.”

Earlier this year, The Christian Institute told the Prime Minister that it was ‘alarmed’ by LGBT activist Jayne Ozanne’s calls for “gentle non-coercive prayer” to be included in legislation banning conversion therapy.

A conversion therapy ban should target abuse, not prayer.

In a letter to Boris Johnson and Women and Equalities Minister Liz Truss, it said: “While the Institute does not oppose a ban that protects people from harmful pseudo-medical practices, the idea that ‘gentle non-coercive prayer’ should be included in a list of illegal actions is alarming. In any event, it would violate the human rights of believers.

“This view is confirmed by a legal opinion from Jason Coppel QC, one of the UK’s leading human rights lawyers, which says a conversion therapy ban encompassing ordinary prayer ‘would be likely to violate Convention rights’.”

Jesus told the woman caught in adultery to ‘go and sin no more’. But saying the same thing to a practising homosexual could mean breaking a planned new conversion therapy law.

Association of Christian Teachers: ‘Our members have no desire to become criminals’