The Christian Institute has threatened the Government with legal action if a proposed conversion therapy ban outlaws the ‘wrong kind of prayer’.

He warned that prayer, evangelism, church membership, baptism and communion could all breach a broad conversion therapy law like the one recently passed in Victoria, Australia.

Mr Coppel stated that such legislation would contravene UK human rights law, which protects “the freedom of church organisations to preach” [and] “require conformity” to its beliefs on sexual ethics and gender identity.

Read Extracts from the Advice of Jason Coppel QC and Rupert Paines, 29 April 2021

not eccentric or peripheral matters of belief

A ban requiring parents to affirm a child’s desire to ‘change sex’ would also endanger parents’ ability to bring up their children in accordance with their beliefs.

Coppel highlighted that “they are not eccentric or peripheral matters of belief. They have a long history within Christian theology and sexual ethics” and the Courts have “consistently regarded such beliefs as protected by Article 9 ECHR and worthy of respect”.

He added that the State must treat these beliefs with “neutrality and impartiality” and that criminalising the expression of them to others “is particularly difficult to justify”.

The Christian Institute’s Deputy Director for Public Affairs Simon Calvert, said: “A ban on spiritual guidance and prayer would be tyrannical and unworkable. Do they expect police, prosecutors and courts to decide which kinds of prayer are criminal and which are not?

“Most people would be horrified by the prospect of someone being convicted for praying ‘the wrong kind of prayer’. We must not allow activists to exploit legitimate concerns as a cover for pursuing anti-religious agendas.”

He continued: “Our lawyers have today made clear to the Equalities Minister that we are prepared to seek judicial review if the Government caves into demands to widen the ban to include the ordinary, everyday activities of churches.

“If they were to introduce such a ban, we are confident a court would find it to be a breach of human rights law.”

Last month, human rights lawyer Philip Havers QC sent a separate legal opinion to Government ministers, warning them that the proposed ban could make everyday Christian actions illegal, including conversations both in church or at home.

The Government has said it is “committed” to banning conversion therapy, and LGBT lobbyists such as Jayne Ozanne are pushing it to make sweeping changes to the law.

She and others have branded prayer for those with unwanted same-sex attraction as ‘conversion therapy’, and says churches should not be permitted to declare homosexual behaviour to be ‘sinful’. 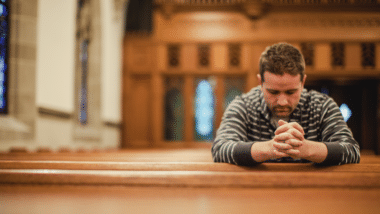