Past and present members of staff at the BBC have revealed that journalists are afraid to report on issues such as gender identity and race.

Paul Wood – a BBC foreign correspondent for 25 years – was told that reporting on controversial topics is being censored by “internal staff networks” such as BBC Pride.

In October, presenter Stephen Nolan said senior staff within the broadcaster had warned him not to report on Stonewall and transgenderism as it could affect his “career and safety”.

Writing in the The Mail on Sunday, Wood said staff have reportedly been accused of “transphobia” by representatives of BBC Pride and that there were claims of “bullying” and “threats of being cancelled”.

He said: “Today, there is evidence from newsrooms across the Western world that freedom of thought and speech are in danger from this same ‘cancel culture’. The very idea of what it is to be a journalist is under threat.”

Wood concluded: “It’s hard to do journalism while looking over your shoulder.”

One senior BBC figure revealed: “We’re fighting our own culture war within the Corporation.”

“You live with the realisation that if I put a foot wrong, the mob will descend.”

A former manager added: “There is a huge level of fear within the organisation, with people thinking that they’re going to be the next to get monstered.”

This is a nightmare and will end very, very badly for the BBC

“This is a nightmare and will end very, very badly for the BBC. Literally, there are people who think we should start banning words they don’t like and banning viewpoints they don’t like.” 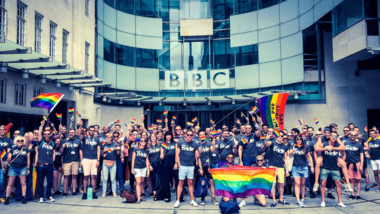 John Humphrys hits out at BBC for ‘institutional liberal bias’