Britain warned, as euthanasia rate in the Netherlands soars

Euthanasia deaths in the Netherlands have risen by 151 per cent over the last seven years, prompting fears about “steady extension” if Britain legalises assisted suicide. 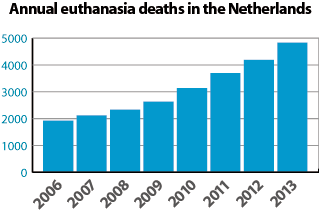 Last year, 3,600 people in the Netherlands were euthanised because they had cancer, and there were 42 reports of euthanasia due to severe psychiatric problems, compared with 14 in 2012 and 13 in 2011.

In 97 euthanasia cases, dementia was the reason given. These patients were mainly in the early stage of the condition, when they were able to communicate properly their wish to die.

Dr Peter Saunders, Campaign Director of Care Not Killing, commented: “What we are seeing in the Netherlands is ‘incremental extension’, the steady intentional escalation of numbers with a gradual widening of the categories of patients to be included.”

He highlighted statistics from Switzerland and Belgium, which show similar steep increases in cases of assisted suicide since the practice was legalised.

“The lessons are clear. Once you relax the law on euthanasia or assisted suicide steady extension will follow as night follows day”, Dr Saunders said.

Dr Saunders commented that Britain needs to “take warning” from these statistics, as the debate on Lord Falconer’s Bill to legalise assisted suicide continues.

Exit International, a group which campaigns to legalise euthanasia, has faced criticism for recently opening a London office.

Members are charged a fee to access online information and attend workshops to discuss methods of suicide. The group was founded by controversial Australian doctor Philip Nitschke.

Kevin Fitzpatrick, of the anti-euthanasia group Not Dead Yet UK, commented: “This is a suicide club, in that you have to pay membership fees.

“Nitschke is not only playing on people’s emotions, but he is profiting from them.”

“Quite why the Home Secretary and Metropolitan Police allow him into the UK to conduct seminars and continue his activities remains a mystery but Britain deserves a full explanation”, he added.