The Scottish National Party has said that it will consider legalising assisted suicide if they are re-elected.

In their 2021 manifesto, the party detailed its plan to set up Citizens’ Assemblies to “find consensus on issues where people have sharply divided opinions” – including assisted suicide.

The Scottish Greens and Scottish Liberal Democrats are already committed to legalising the practice.

Dr Gordon Macdonald, CEO of the Care Not Killing coalition, said it was “utterly inappropriate for a political party to make a manifesto commitment on a conscience issue”.

Dr Macdonald added that would be a “total abrogation and abdication of responsibility to set up so-called citizen’s assemblies to pontificate on matters that people elect politicians to parliament to decide upon”.

The pledges come as activist group Dignity in Dying, formerly known as the Voluntary Euthanasia Society, launched a campaign to put pressure on Holyrood to remove legal protections from some of the most vulnerable people in society. 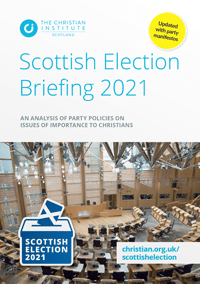 An analysis of party policies on issues of importance to Christians

Elections for the Scottish Parliament take place on 6 May 2021.

For all our Scottish Election 2021 resources go to: christian.org.uk/scottishelection

A majority of MSPs in both the Scottish Conservatives and Scottish Labour parties voted against the Bill, with MSPs from the Scottish Liberal Democrats and the SNP also rejecting the legislation, but both Scottish Green MSPs voted in favour of the Bill.

Former leader of the Scottish Conservatives Ruth Davidson has since said the law should change, despite voting against the Bill at the time.

During a 2015 debate in Westminster, SNP MP Dr Philippa Whitford spoke out powerfully against the practice.