A charity which helps vulnerable women and the unborn was evicted from a Lambeth Council event reportedly because it went against the local authority’s ‘values’.

The Life charity said the council’s actions were a breach of freedom of speech and did a disservice to “women in crisis who may need our help”.

A Lambeth councillor has claimed Life’s stall at its Country Show “wasn’t officially allowed” – despite it being listed as an exhibitor.

Life had applied to the show in January, explaining what it did and including pictures of previous exhibits. It also provided a link to its website and said it was a pro-life charity.

Our message at Life is delivered in a compassionate and caring way.

The application was approved in April but a volunteer arrived on the second day of the event in July to find the marquee taken down and possessions removed from the pitch.

Organisers said the charity went against the values of the local authority and was not in line with the causes it has been funding and supporting.

Later, Councillor Ed Davie said Life “were not on the approved list of exhibitors”, before the Council stated: “After the nature of the booking was revealed, and following complaints, the stall was prevented from opening on the second day of the show”. 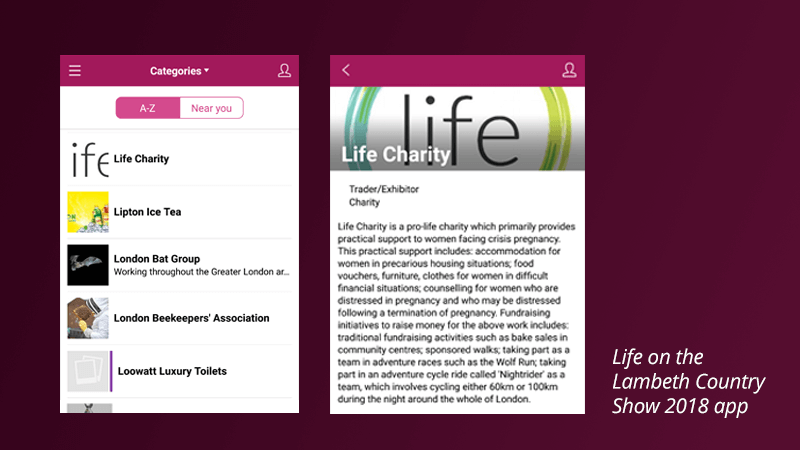 Life’s Director of Education Anne Scanlan said: “Our message at Life is delivered in a compassionate and caring way.”

She explained: “There were life-like fetal models and pictures of the unborn baby at different gestational stages which can be seen on any pregnancy website including the NHS.”

Scanlon went on to accuse the Council of “aggressively shutting down the voice of prolifers trying to reach out to vulnerable women in crisis and educating people about life in the womb”.

“Councils which try to shut down and silence prolife organisations like Life must recognise that they are doing a disservice to women in crisis who may need our help.”