An Orthodox Jewish school has been told it risks being shut down by the Department for Education (DfE) because it refuses to promote LGBT lifestyles – despite this not being a legal requirement.

Mechinoh School, an independent, all-boys secondary school in Salford, was deemed to be ‘not meeting standards’ as school leaders would not “actively promote” gender reassignment or homosexuality to pupils.

Recent analysis by respected think tank Policy Exchange found Ofsted’s secular bias meant it was guilty of ignoring  the freedom of parents to ensure their children are educated according to their own beliefs.

The school was rated ‘Good’ across three of the four areas in its January 2019 Ofsted inspection, but labelled ‘Requires Improvement’ overall.

In its follow-up inspection in November, Ofsted commended the school for teaching respect for all people but claimed it was in breach of the Equality Act, which lists sexual orientation and gender reassignment as protected characteristics.

The DfE warned the school it needed to come up with an action plan or face sanctions.

However, the Equality Act requires schools not to discriminate in how they educate or treat pupils but does not dictate what is taught in schools.

Headteacher Rabbi Eliyohu Rubinstein told the DfE that Mechinoh has been “unjustly” undervalued by Ofsted, solely due to its position on teaching LGBT issues in school.

He said that school is not an appropriate place “to discuss subjects relating to intimacy in relationships, sexual orientation and gender reassignment”, adding that such topics were best covered at home.

The Christian Institute’s Education Officer John Denning said: “Nothing in the Equality Act requires independent schools to promote anything. Both inspectors on the ground and those who quality assure reports should know this.

Mr Denning continued: “There is a world of difference between teaching respect and actively promoting different lifestyles as Ofsted suggests.

“It is completely unacceptable for Her Majesty’s Inspectors to report that a school is in breach of the law but then get the law completely wrong. It is Ofsted that ‘requires improvement.’”

Its report, The Watchmen Revisited, said that “a proper understanding of freedom of religion in a British context is not one that can be confined to the private sphere, but must include the right to fully and actively express those beliefs in public observance, including in education”.

For more information on the law surrounding what schools can and can’t do in the name of equality and human rights, download a copy of our Equipped for Equality briefing, or watch our short series of videos on the same subject. 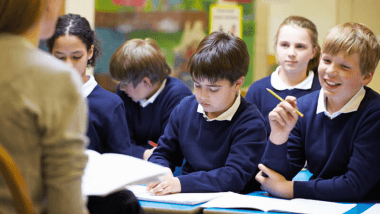