A global LGBT group has thrown its support behind a statement calling for ages of consent to be lowered around the world to allow adolescents to engage in sexual activity freely and without “stigma”, it has been revealed.

A declaration by the UN’s Women’s Rights Caucus called on “governments at all levels”, as well as the judiciary, non-governmental organisations, the media and businesses to promote a range of extreme policies on sexuality, radical gender ideology and abortion, including statements on lowering ages of consent.

The broad statement was promoted by the International Lesbian, Gay, Bisexual, Trans and Intersex Association (ILGA), a group which claims to represent more than 1,600 organisations worldwide. Stonewall, Mermaids, The Proud Trust and LGBT Youth Scotland are among the UK organisations which support ILGA.

The declaration advocates the elimination of “all laws and policies … that limit the exercise of bodily autonomy, including laws limiting legal capacity of adolescents … to provide consent to sex”. 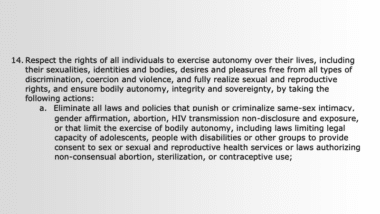 It also says Governments should “End the criminalization and stigmatization of adolescents’ sexuality, and ensure and promote a positive approach to young people’s and adolescents’ sexuality that enables, recognizes, and respects their agency to make informed and independent decisions on matters concerning their bodily autonomy, pleasure and fundamental freedoms”.

The World Health Organisation defines adolescents children between ten and 19 years of age.

In response to criticism, ILGA said it “does not advocate to eliminate or lower the general age of consent”, while Stonewall claimed such assertions are “categorically untrue”.

Margaret Lynch, an Alba Party candidate for Central Scotland, was hounded by activists after highlighting the declaration’s demands, and Stonewall and LGBT Youth Scotland’s support for ILGA.

A spokesman for the party said: “The organisations referenced have both signed up to this demand, and both have received substantial amounts of government funding.”

He added that the assertions are “based on fact”, and that if “the organisations do not support what they have signed up to it is for them to say or provide clarification”.

The Feminist declaration on the occasion of the twenty-fifth anniversary of the Fourth World Conference on Women was originally published in March 2020.

Age of consent set at 15 in France