A London-based LGBT group has complained about a rainbow artwork which was inspired by children using “the natural phenomena as a symbol of hope” during the lockdown.

Brockley Queers in south London claimed that “the rainbow is ours” and told the Artmongers group who decorated a bridge that it cannot use it for a different meaning “without taking it away from us”.

In the UK the rainbow has recently been used as a symbol of solidarity with NHS workers, with many children placing pictures in the windows of their houses.

The Artmongers told the activists that its bridge artwork had “a different meaning” and they were “just trying to maintain the context”.

"The rainbow is ours." Stunning lack of self-awareness and astonishing display of narcissism from 'Brockley Queers' in response to a rainbow painted, for kids, on a public bridge. pic.twitter.com/AFuEb4tyMj

But the LGBT group defaced the mural with pro-transgender symbols and accused Artmongers of “appropriating” the rainbow, claiming the artists cannot use it if it means losing its “explicitly queer meaning”.

The move was met with a backlash on social media, with one Twitter user calling it an “astonishing display of narcissism”.

Last month, LGBT commentator Jamie Wareham said that some in the LGBT community feel they are being ‘erased’ by the rainbow’s new connection to the NHS.

However, he did admit that the rainbow has been a symbol for other communities for many years.

“Not least in Christianity where the rainbow denotes God’s covenant–a connection between God and all living creatures–with Noah”, he wrote. 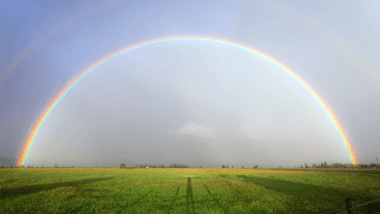