A video promoting assisted suicide has been branded “sensationalist” and “scaremongering” by a leading UK end-of-life charity.

Hospice UK described the message as “misleading and irresponsible” and called for the video to be removed.

It accused the activist group who produced the video, Dignity in Dying – formerly known as the Voluntary Euthanasia Society – of playing on people’s fear and anxiety.

Dignity in Dying have refused to back down claiming the video gives a “realistic portrayal” of some deaths in the UK.

However, a GP with 40 years’ experience in medicine tweeted that he had never encountered the situation described in the video. 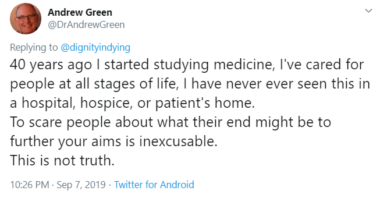 Dr Andrew Green said: “To scare people about what their end might be to further your aims is inexcusable.”

An NHS palliative care doctor added: “The very last thing the debate on assisted dying needs is deeply misleading and wildly inaccurate portrayals of dying in a hospice.”

Tracey Bleakley, Chief Executive of Hospice UK, described the video as “a misrepresentation that undermines a strong evidence base of expert care delivered by over 200 hospices, care that consistently brings symptom relief and comfort”.

She added that such campaigning could scare vulnerable people from accessing the support that they need.

The UK is regarded as a world leader in palliative care. Experts say that almost no patient is beyond the help of pain-relieving medicine.

In 2015, an assisted suicide Bill was resoundingly defeated in the House of Commons. A similar proposal in Scotland was also rejected by MSPs.

‘Death is not the best treatment’