Nearly 700 people gathered to hear the testimony of Christians who have suffered for upholding their faith, as part of The Christian Institute’s ‘Faith under fire’ tour in Scotland.

On the final night of the tour, 207 people packed out the GLO Centre in Motherwell, with another 200 plus in attendance on intervening days in Inverness and Portree.

The Christian Institute’s Scotland Officer, Nigel Kenny, said: “It was a huge encouragement to see so many people coming to hear the inspiring testimonies of Daniel McArthur and Hazelmary Bull.

The public consensus is that Ashers should not have been prosecuted for living out their Christian faith in the work place.

“The large number of people who came was a great encouragement for Daniel, his wife Amy, and Peter and Hazelmary Bull. A big thank you to everyone who came along to show their support!”

Mr Kenny’s gratitude was echoed by Hazelmary Bull, who said that she and her husband Peter had been “overwhelmed” by the turnout, “especially in the Highlands and Islands”.

Taking the meetings alongside Mr Kenny was The Institute’s Northern Ireland Officer Callum Webster who said: “It has been great to see large numbers of Scottish Christians coming out to hear the testimony of believers who have faced legal action because of their stand for biblical truth.”

He added: “The level of interest reflects the continued importance of religious liberty cases like Ashers in the public consciousness, especially ahead of their appeal in February next year.

“The public consensus is that Ashers should not have been prosecuted for living out their Christian faith in the work place. We hope that the next court ruling recognises this.” 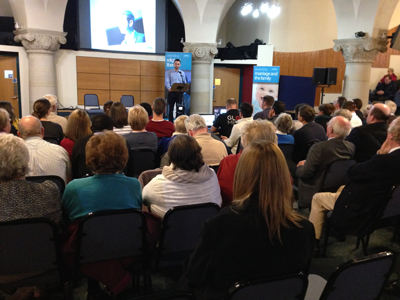 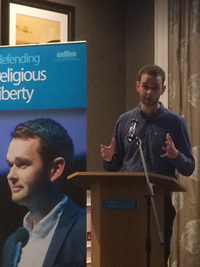 Daniel McArthur, the General Manager of Ashers Baking Company spoke movingly of God’s faithfulness and thanked the Christians in attendance for their prayers and letters of support.

Earlier this year, the bakery was taken to court for declining to decorate a cake with a pro-gay marriage campaign slogan.

The McArthur family, who own and run the bakery, said they could not fulfill the order because it conflicted with their Christian beliefs. An appeal against the ruling will be heard on 3 February next year.

Christian B&B owner Hazelmary Bull also testified to God’s goodness as she described how she and her husband Peter had faced court for their traditional marriage beliefs.

Peter and Hazelmary Bull were sued in 2008 by a same-sex couple over their policy to allow only married couples to share a double bed in their B&B.

In 2011 Bristol County Court ruled against them and ordered them to pay damages of £3,600. Their subsequent appeal to the Supreme Court was unsuccessful.

Donate today to support other cases of national importance for religious liberty.

BBC News: Day 1 of Ashers at the Supreme Court

‘As psychiatrists we prevent suicide, we don’t provide it’

Kent and Barnsley join other councils in withdrawing trans guidance

Journalist who threatened to behead Christians in Canberra walks free