Former Premier League footballer Steven Caulker has opened up about how his “suffocating” gambling addiction hurt his career, and why he’s now trying to help other addicts.

Caulker, who has one England cap and now plays for Turkish side Alanyaspor, explained that while football didn’t get him started with gambling, it exacerbated the problem.

“It very much normalises gambling, which is not OK”, he said. “Having gambling adverts everywhere, including on your shirt and around the side of the pitch, doesn’t help. I’m no expert in marketing but if these companies are pumping millions and millions into advertising, they’re doing it for a reason.”

The former Liverpool and Tottenham centre-back told BBC Sport that the worst thing about addiction wasn’t losing money, but the effect it had on his relationships with his friends and family.

“Whenever I was with my family or friends or playing Premier League football at the time, there was always that thought in the back of my mind, ‘I need to get my money back’.

“The lies I told my family and friends still stick with me today. It was suffocating, and they were my worst moments looking back. But now I use it as fuel to motivate me to be a better person.”

Addiction affected him psychologically too, as he says he would even be thinking about his losses during games, including in his sole England appearance.

While he attempted to break his habits, blocking himself from gambling in the UK, going to rehab and giving his bank cards to his parents, he says he was lured back in by gambling companies offering him VIP treatments to encourage him to continue gambling.

One sent him and some friends on an all-expenses paid trip to Cyprus, with the only condition being that he visit a casino and gamble – a temptation he found too difficult to resist.

Caulker eventually overcame his addiction and has not placed a bet in more than two years. But he still receives unsolicited texts from gambling companies and casinos.

He first spoke out about his gambling addiction and drinking problems in an interview with The Guardian in 2017 – an article which has given him a platform to help other footballers in similar situations.

He said: “Over the years, that article has led so many people to me, and allowed me to build relationships with people and help them get sober. It may have affected me in football, but it’s worth way more than that. This issue costs people their lives.”

He says “between 20 and 30” footballers have contacted him, and says there is “a lack of compassion” within football, adding that the “fear of being dropped fuels the secret nature of the addiction”.

He does not blame coaches for lack of help, as “many tried” to help him, but said more education is needed, and suggested coaches and sporting directors should learn how to tackle such issues when training for their coaching badges. 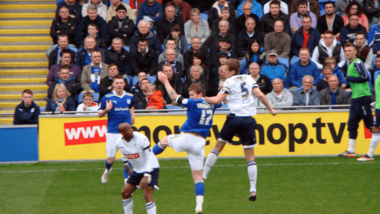 International footballer speaks out on his gambling addiction

Columnist: ‘Gambling adverts should be kicked out of football’