A conservative evangelical minister has received “a huge amount of vitriol on social media” after he was asked to lead the Church of England’s online national service.

Revd Dr Lee Gatiss said “a coordinated campaign” had been organised against him by LGBT activists” even before the service was broadcast.

Gatiss has consistently spoken out to defend biblical ethics on sexuality, marriage and gender ideology and is the Director of Church Society, which seeks to reform the CofE with a focus on the Bible’s teaching.

The CofE has been conducting online national services throughout the pandemic, led by a variety of the church’s ministers.

Revd Gatiss led last Sunday’s service from Christ Church, Cambridge. He preached on Romans 10:5-15, emphasising the inclusiveness of the promise: “Everyone who calls on the name of the Lord, will be saved”.

He added that just as in the time of the Apostle Paul, “there are always campaigns and slogans, badges and flags, for us to signal our virtue on the issues of the day, to show that we’re on the right side of things”.

“If we don’t do that thing, we’re meant to feel ashamed of ourselves, guilty, maybe we’re meant to feel fearful of reprisals, of being tarred with a negative label or of being left out. And we can make ourselves ‘righteous’ again, by doing whatever the latest campaign says it is that we are supposed to do.”

The decision to ask the respected minister to lead the service was criticised last week by homosexual news website PinkNews, which accused him of “opposing any step towards LGBT+ inclusion in the Church of England” because of his stance on biblical truth.

After the service was broadcast he reported a tweet he received reading: “Homophobia = Death. Homophobia causes abuse, violence and suicides. Homophobes deserve what they put out coming back at them.”

Gatiss said a group calling itself Christians for LGBTI+ Equality had “whipped up such hate and vitriol against me over the weekend”.

One member of that group responded, saying: “hate can never be the way, but it was very unwise to have offered him a platform in the first place given his public statements about LGBTI+ people in the life of the Church”.

But Revd Dr Gatiss noted that most of the abuse towards him was also an attack on the CofE’s historic theological foundations.

“The official theology of the Church of England was labelled ‘homophobic and abusive'”, he said.

The formal position of the Anglican Church is that: “in view of the teaching of Scripture” it “upholds faithfulness in marriage between a man and a woman in lifelong union, and believes that abstinence is right for those who are not called to marriage.” 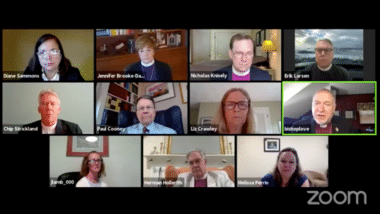 US bishop defends Bible’s position on marriage during disciplinary hearing

‘Church of England must ditch ‘relevance’ to thrive’: Bishop of Maidstone