A Cambridge college will no longer fly the multicoloured LGBT flag, after senior academics said the college flag is the only one which “speaks for all of us”.

Fellows at the Gonville and Caius college voted not to fly different flags throughout the year, including the ‘pride’ flag.

The decision has been attacked by LGBT activists.

In a statement, the college council said: “Flying a flag is making a statement. Many flags are political symbols of one sort or another.

“The college has no mechanism to establish the collective political stance of its members. The college flagpole should not be used to fly flags to express collective support for political causes.

the College flag speaks for all of us. No other flag does.

“Flags flown to express opinions about causes and issues, have the potential to divide us. All of us are Caians, so the College flag speaks for all of us. No other flag does.”

College fellow and historian, David Abulafia, praised the decision as “extraordinarily sensible”, but the decision was attacked by LGBT activists.

One claimed that: “Caius cannot claim to be an inclusive, supportive environment for its LGBT students whilst pandering to intolerant, illiberal views.” 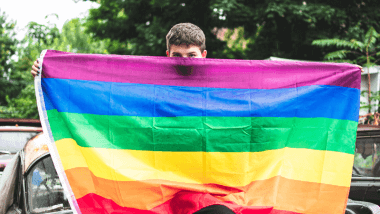