US Christian artists secure legal victory ‘for everyone’

Two Christians who faced being fined if they declined to create same-sex wedding invitations have won their legal case.

Joanna Duka and Breanna Koski run Brush & Nib Studio, a stationery business that makes invitations for weddings and other events.

They challenged a Phoenix non-discrimination law and this week the Arizona Supreme Court ruled in their favour, saying freedom of speech is not limited to the home or church.

A delighted Joanna said: “The messages we convey through our art mean so much to us.

“Breanna and I will gladly serve everyone, but we cannot create custom artwork celebrating certain events.”

And Breanna said: “Some may not like our personal values or the artistic decisions we make. But that’s not what today’s decision is about.

“It’s about who should decide what artists say through their artwork — artists or the government.”

The graphic designers were under threat of a $2,500 fine and possible imprisonment due to the non-discrimination law and were supported by the Alliance Defending Freedom (ADF) legal group.

ADF said the result was a “victory for everyone” because it upheld the right of artists to act according to their conscience.

“Joanna and Breanna will now be able to create custom wedding invitations and to communicate about their beliefs without fear of government punishment, as any artist should be free to do.”

ADF speaking at a press conference after the ruling 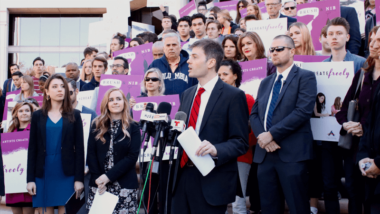 In June 2018, the Arizona Court of Appeals upheld a decision from Maricopa County Superior Court dismissing the Christians’ case.

But the Arizona Supreme Court said: “The rights of free speech and free exercise, so precious to this nation since its founding, are not limited to soft murmurings behind the doors of a person’s home or church, or private conversations with like-minded friends and family”.

It added: “These guarantees protect the right of every American to express their beliefs in public.

“This includes the right to create and sell words, paintings, and art that express a person’s sincere religious beliefs.”