Women’s sport needs to be protected from the dominance of transgender athletes, former elite athletes are saying, after a biological male triumphed in the pool at a US inter-collegiate competition for women.

Lia Thomas, a 22-year-old man who is living as if a woman, swam to victory in the women’s 500-yard freestyle race at the National Collegiate Athletic Association (NCAA) championships earlier this month.

NCAA rules on testosterone levels allowed Thomas to compete, but many women – including a teammate – have complained that men have an unfair biological advantage over women in physical sporting contests.

Ahead of the national event in Atlanta, a teammate – speaking anonymously – told Fox News Digital that the impact of Thomas’ participation in the competition had “completely ruined the integrity of the sport”.

The college student added that she would not be intimidated into silence when “teammates and women across the country” were being “discriminated against” and their rights being “violated”.

Reka Gyorgy, who was knocked out of the championship preliminaries by Thomas, said: “I can’t help but be angry or sad. It hurts me, my team and other women in the pool”.

She complained: “Every event that transgender athletes competed in was one spot taken away from biological females throughout the meet.”

Commenting on the situation, tennis great Martina Navratilova said the rules allowing Thomas to take part were “not correct” and that biological men should only “compete against men”.

“The solution perhaps for now”, Navratilova suggested, “is to swim in a lane; you can compete but you don’t get the medal”. Alternatively, she proposed: “Maybe put an asterisk there.”

British Olympic silver medallist, Sharron Davies MBE, tweeted: “If you’re an athlete, coach, retired athlete, sporting official, sports journalist or sports enthusiast & keeping your head down, ignoring this injustice, shame on you.. you are partly responsible for all those from now on that lose their places, medals & opportunities.”

The Director of Concerned Women for America, Annabelle Rutledge, said: “This is a male displacing women. The female who came in second today is the real winner. Only women can win a women’s swimming and diving championship”.

It’s beyond obvious why this is wrong

In the UK, Dr Nicola Williams from Fair Play For Women observed: “Thomas was ranked 462nd when racing against men but now takes 1st place when up against women.

“This is because Thomas has the wing-span and power advantage of a 6 foot 4 male body. It’s beyond obvious why this is wrong”.

Writing in The Times recently, teacher and transgender campaigner Debbie Hayton, said: “The future looks bleak for women in sport.”

Hayton was born male and ‘transitioned’ as an adult but accepts he is not a woman.

He argued the “transgender thought police” might not agree with him, but it was wrong for “male bodies” to participate in female sport.

“Trying harder is not an option when your rival has the advantage of male puberty. Testosterone leaves a legacy that cannot be erased: larger muscle mass and stronger bones, not to mention a skeleton that never developed to carry children.” 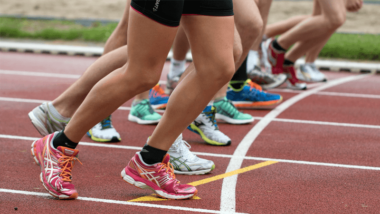