A study which claimed that being religious makes children less generous and meaner than their non-religious peers has been retracted by its own authors.

The study was prominently reported by The Guardian and The Independent when it was published in 2015, despite receiving strong criticism from academics.

Professor Jean Decety has now admitted to making a “stupid mistake”, and asked Current Biology, the journal which published the study, to scrap it.

In the paper, Prof Decety had claimed that children of religious parents exhibit less altruistic behaviour than others, and that they may inflict harsher punishments on people if given the opportunity.

Altruism was measured in the children by playing a game in which the children were given ten stickers and offered the opportunity to share them with another unseen child. 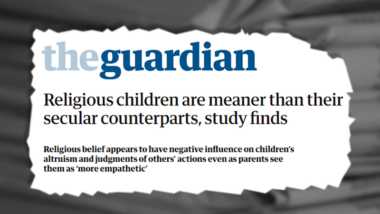 The study examined over 1,000 children from the US, Canada, Jordan, Turkey, South Africa and China, but made significant errors in the way children’s cultural upbringing was accounted for.

After re-examining the paper and correcting his control methods, Prof Decety discovered that “country of origin, rather than religious affiliation, is the primary predictor of several of the outcomes”.

He said the error was a “stupid mistake on our part! Not intentional for sure”.