Labour leader Sir Keir Starmer has apologised for visiting a church which teaches the biblical understanding of sexuality and marriage – a move branded “an insult” to Christians.

On Good Friday, Sir Keir shared a video of his visit to Jesus House for All The Nations in North London, during which he praised the church for its role as a pop-up centre in the vaccine roll-out.

But he was attacked by LGBT activists within the party, who said the visit was “unacceptable” and “does not align with our values on conversion therapy or LGBT+ equality”.

Agu Irukwu, who is senior pastor of Jesus House, has previously challenged attempts to change the law to normalise and promote homosexuality, having signed open letters criticising parts of the the Equality Act 2006 and the redefinition of marriage in 2013.

The Labour Campaign for LGBT+ Rights said it had written to the leader of the opposition, and had received an “unreserved apology” from him.

Starmer removed the video from his social media channels and tweeted: “I completely disagree with Jesus House’s beliefs on LGBT+ rights, which I was not aware of before my visit. I apologise for the hurt my visit caused and have taken down the video. It was a mistake and I accept that.”

Labour’s LGBT+ group responded: “Thank you Keir Starmer. We are pleased that you have recognised and apologised for this mistake.

“We look forward to working with you to end conversion therapy and achieve equality for LGBT+ people.”

In a statement, a Labour spokesperson said: “The Labour Party is unwavering in its support for the LGBT+ community and a woman’s right to access safe abortions, and have called for the government to stop dragging its feet and ban the abhorrent practice of conversion therapy.”

The church was hounded by activists online, and Pastor Agu Irukwu said the reaction has been “upsetting”.

He said: “As a child growing up in a Commonwealth nation, one aspect of Great Britain which I found most admirable was its promotion of strong values, including fairness and justice,” he said.

“Over the past 48 hours, I have been disturbed to see these values eroded, especially in the courtroom of social media; we have felt prosecuted, judged, and sentenced unfairly.

“Some of the language that has been directed at us can only be described as vile, abusive, hateful, and possibly criminal. It is tantamount to cyberbullying and the timing of this attack during Easter, one of the most important events in the Christian calendar, was particularly upsetting for us as a congregation.”

Writing in The Spectator, Brendan O’Neill called the apology “an insult”, and hit out at the decision to delete the video, which had praised the church for its tireless efforts in helping the local community.

He commented: “The Christians at Jesus House are guilty of nothing more than holding traditional Christian beliefs.

“Just look at the coverage of this daft controversy. ‘Keir Starmer criticised over visit to church where pastor opposed same-sex marriage’, says the Guardian’s headline. In other words, ‘Starmer criticised for visiting a Christian church that adheres to Christian doctrine’.” 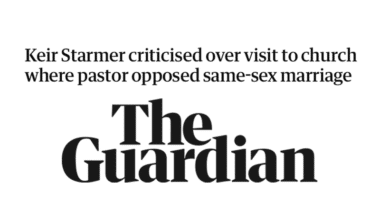