A father who went blind in one eye following an acid attack has regained his sight thanks to a new treatment involving adult stem cells.

James O’Brien had ammonia sprayed in his face when he was 18, which burned the surface of his eye, leaving scar tissue.

Now 44, he has been undergoing treatment at London’s Moorfields Eye Hospital for the past 18 months.

A year ago, doctors took tissue from his healthy eye and used it to grow new tissue in the blind eye.

He was given a 75 per cent chance of success, and after further treatment – including receiving a donated cornea – the results of the work were clear.

He said he was most looking forward to seeing his wife and kids, revealing that his daughter had wished earlier in the year: “’I wish my Daddy’s eye would get better soon.’ And it has”.

He added: “Before I couldn’t even see the ophthalmic chart, the chart with all the letters on, now I can see the third line down and it’s going to get much better.”

The consultant ophthalmic surgeon who performed the procedure said he hoped this pioneering treatment could now be used more widely to treat acid attack victims.

Sajjad Ahmad said: “James – in a crude sort of way – kindly accepted to be the guinea pig for this treatment. Because of what he’s done, it will now enable us to offer it to everyone who needs it.

“This is going to have a huge impact. A lot of these patients are young men so it affects their work, their lives, those around them. It’s not just the vision that drops, it’s the pain.”

Adult stem cells are an ethical alternative to embryonic stem cells, which involves the destruction of human embryos. 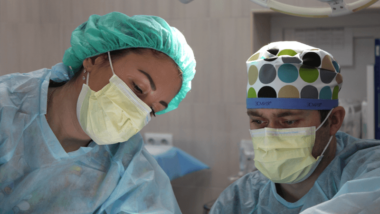