The Welsh Assembly has further endorsed a Bill to criminalise parents who smack their children.

Social Policy Expert Dr Ashley Frawley says the legislation ‘opens the door’ to loving parents being criminalised for actions that are a “perfectly normal” part of parenting.

The Bill is expected to be ratified in a final debate next week, with parents subject to prosecution from 2022. 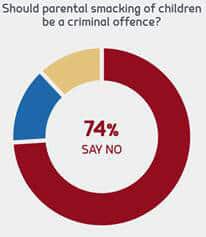 During the debate, AMs discussed eleven amendments by Janet Finch Saunders AM intended to mitigate the most damaging effects of the Bill.

These included requiring the Government to promote public awareness of the ban and to provide sufficient funding to local authorities and public bodies.

However all the amendments were rejected apart from two relating to reporting on the effects of the law.

Darren Millar AM stressed that the Welsh public are massively opposed to the Bill, whilst Mark Isherwood AM said it raised the spectre of a “snoopers’ charter”.

Councillors say smacking should not be made a criminal offence #stopthesmackingban pic.twitter.com/z4GbE1y4tT

Spokeswoman for the Be Reasonable Wales campaign Dr Ashley Frawley said: “It’s truly sad that AMs have backed this legislation which will open the door to normal, loving parents being investigated by the police, cautioned and even convicted for actions that are a perfectly normal and harmless part of family life.”

She commented that the Bill isn’t about ‘protecting children’ as the current law already protects children from violence and abuse.

“This is ideologically driven. It represents the views of a minority of self-styled ‘parenting experts’ who don’t like smacking, and feel that thousands of decent, loving parents across Wales should be forced to adopt their style of parenting”, she added.

68% of individuals who submitted responses to the @SeneddCYPE smacking Bill consultation were against it. See the @ONS analysis: https://t.co/ZucVUoH38K pic.twitter.com/mwn5z0cwDZ