Changing the law on organ donation to a ‘presumed consent’ system will not increase the number of transplants, an ethics professor has said.

Professor David Albert Jones, Director of the Anscombe Bioethics Centre, believes that requiring people to opt out if they don’t want to donate their organs could actually see a drop in transplant rates.

Currently, anyone wishing to donate an organ must opt in to the organ donor register, but the law in England is set to change from 20 May.

Prof Jones said it is “extremely regrettable” that voluntary organ donation is being undermined by the change.

“’Deemed consent’ is a euphemism for taking organs without express consent, and this is no longer donation.”

He also pointed out that while the aim is to raise the number of donations, transplant rates initially went down in Wales after presumed consent was introduced, during a period when rates increased in Scotland and England.

Prof Jones said: “Transplant rates continue to fluctuate from year to year but there is no evidence that significantly more transplants have occurred in Wales because of the law”.

He added that the claims the number of donations will increase in England by 700 per year is “entirely bogus”. 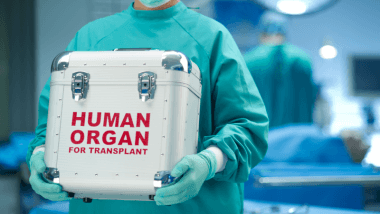 Presumed consent organ donations set to start in May