On this day in 1971, OM’s first vessel Logos left a shipyard in Rotterdam for London, where it would be loaded with literature, ready for its maiden ministry voyage to India.

Over the past five decades, the ministry has grown and the four ships – Logos, Doulos, Logos II and Logos Hope – have provided help in 150 countries, with almost 49 million people welcomed on board, as well as many more reached out to on shore.

OM founder George Verwer said when he first proposed the idea of buying a ship to give the organisation a global reach, people thought he had “lost his marbles”, but 50 years on, his idea is still bearing fruit.

He said: “We rejoice over all God has done through our four vessels. At least 100 million people worldwide have come into contact with the gospel in some way.

“We know thousands have professed faith, but only heaven will tell the full story. We remain so thankful to God for our countless behind-the-scenes workers, prayer partners and supporters.”

Seelan Govender, CEO of OM Ships, said: “We look back at 50 years of Ship Ministry impact on the world and are incredibly humbled and honoured to be used by God.

“The message of the gospel is one of transformation, and millions have experienced its power in their life and community through their encounter with one of our ships.

“This message continues to drive us forward as we consider that millions more need to experience God’s love.” 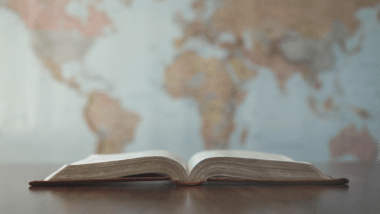 700th translation of the Bible celebrated

Comenius: A Christian educator ahead of his time