David Cameron’s attempts to clampdown on ‘non-violent extremism’ will extinguish freedom of speech and debate, an atheist commentator has warned.

Writing in The Telegraph, Brendan O’Neill said there was a “dark, twisted irony” to the Prime Minister’s speech in Birmingham this week, during which he said the Government will “tackle” all those who “may not advocate violence” but who do promote “other parts of the extremist narrative”.

O’Neill said this is a “step too far”, and that “official clampdowns” on speech and debate can “never be justified”.

And he pointed out that non-violent extremism could even cover Christians who do not support same-sex marriage, because this could be seen as not having “respect for minorities”.

Mr Cameron said in his speech that, “you don’t have to support violence to subscribe to certain intolerant ideas which create a climate in which extremists can flourish. 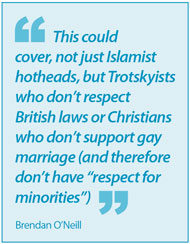 “Ideas which are hostile to basic liberal values such as democracy, freedom and sexual equality”.

O’Neill described the controversial Extremism Disruption Orders, which were announced in this year’s Queen’s Speech, as “terrifying” because they could be used “to shut-up anyone who says extremist things”.

“What May and Cameron view as the pesky distinction between action and speech, between violent and non-violent extremism, is actually the foundation stone of all free, enlightened societies: we police criminal behaviour, but not thoughts, ideas, words”, O’Neill argued.

Campaigners against EDOs have already warned that those who oppose gay marriage and a wide-range of others could be caught.

The Christian Institute and the National Secular Society have both argued that the measures could damage free speech.

On BBC Radio 4’s Today programme, Home Secretary Theresa May was unable to give a satisfactory answer when challenged to give an example of words or actions that would be banned under the new law.

May responded that definitions of extremism would be provided when the counter-extremism Bill is published.