A young man has made history as the BBC’s first children’s presenter with Down’s syndrome.

George Webster, 21, made his debut as a CBeebies host with the announcement: “Hi, I’m George, and I love to dance.”

Before being asked to join the TV channel’s preschool team, George appeared in a short video for BBC Bitesize in which he challenged popular misconceptions about Down’s syndrome.

Reflecting on his first show, George told The Guardian: “I just felt really positive and excited and happy to get going.”

He also hoped that he would be able to encourage children watching CBeebies House “to enjoy every moment and take every opportunity as it comes”.

George’s mum told the newspaper: “I was blubbing one minute and smiling the next.

“I just love his work ethic and his positivity. We always say George’s days are all 10 out of 10 because he makes them like that.”

In a short film for the broadcaster’s Bitesize resource, George debunked a number of myths often associated with people who have the chromosomal condition, including thinking that they are always happy but cannot live independently.

He said: “People without Down’s syndrome can make the world more inclusive by not judging us, making assumptions of us, because we exist and we need to be treated equally and with respect.”

As well as being a TV presenter, George is an ambassador for Mencap and a student of performing arts with Mind the Gap, a theatre company for people with learning disabilities.

Last week, disability rights campaigner Heidi Crowter vowed to continue to her fight to overturn the law that allows babies with Down’s syndrome to be aborted up to birth.

Along with fellow campaigner Máire Lea-Wilson, Heidi argued that Britain’s abortion law is discriminatory. The High Court rejected the case, saying it was a matter for Parliament.

the fight is not over

Speaking after the ruling, Heidi said she was “really upset not to win but the fight is not over”.

Under current legislation, abortion is permitted up to 24 weeks for most reasons but is available at full-term for children deemed to have a ‘severely life-limiting condition’ – including Down’s syndrome. 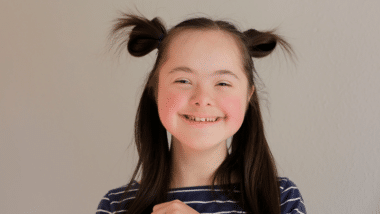