A legal challenge has been launched today against plans for a state-appointed named person for every child in Scotland.

Papers were lodged at Edinburgh’s Court of Session by The Christian Institute alongside concerned parents.

Institute Director Colin Hart said: “We are making a stand for all mums and dads who are doing their best for the children they love.”

National TV and radio broadcasters as well as newspapers covered the launch, which took place at Scotland’s supreme civil court this morning. 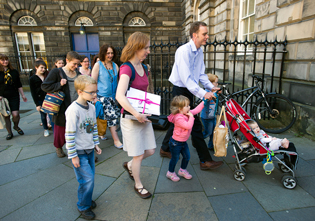 Legal papers were lodged at Edinburgh’s Court of Session by The Christian Institute alongside concerned parents.

The Named Person initiative will see a state guardian assigned to every child between birth and 18-years-old.

They will be able to share information with a wide range of public authorities and may intervene without parental consent.

Under Scottish Government plans the Named Person scheme is set to be rolled out across the whole of Scotland by 2016, but it is already operating in some areas.

The legal papers have been lodged by The Christian Institute, Christian charity CARE, Tymes (The Young ME Sufferers) Trust, and the Family Education Trust.

Parents James and Rhianwen McIntosh and Deborah Thomas are also part of the legal action.

The McIntoshes spoke out last month after they were told their child’s private medical reports would be shared with a state-employed named person.

The couple were shocked to discover the policy was already being used by the NHS in their area, and Mrs McIntosh said: “I love my child better than anyone else and so for the Government to tell me that I needed someone who knew better about my child to see to their wellbeing, that was really quite belittling to me as a parent.”

Deborah Thomas, from near Comrie in Perthshire, said she first came across the Named Person scheme when her son was asked to fill in what he described as a “creepy and weird” survey at school – without her knowledge or consent.

She later found out that questions included, “things like his perceptions of our family’s income, the seriousness of our family’s arguments, and whether he sometimes felt like he couldn’t go on – which is effectively a suicide question”.

She warned: “I think that the Named Person provisions effectively reduce the role of parenting to that of a technician working with a toolkit of Government approved prescriptives.”

Colin Hart commented: “This marks the beginning of a landmark case which has implications for every family in Scotland.”

“We are not prepared to stand by and watch as the roles of parents and their rights to a family life are diminished and trampled over by an authoritarian big brother initiative designed to make its presence felt in every living room in the land”, he added.

Mr Hart also said: “We have been heartened by the huge amount of support which we have had and welcome the fact that numerous newspapers have backed our stand in editorial comments endorsing our views and those of the silent majority who want this law reversed.”

“The policy may be a well-intentioned attempt to prevent children who may be in need of help from ‘slipping through the net’.

“However, that safety net will only be stretched to breaking point as a result of this policy, raising the prospect that genuine child protection cases will fall through the holes”, he continued.

Mr Hart commented: “The authorities already possess all the powers they require to deal with cases of neglect or abuse.

“There is also real concern that there is nothing in the Act to prevent a child’s named person meeting with them without the knowledge or consent of the child’s parents.”

He concluded: “We hope the court will rule in our favour when the arguments are debated in detail and it is clearly shown the extent to which European rules are being breached by this proposal.”

No to Named Persons 5 years on: Episode 7

No to Named Persons 5 years on: Episode 6