MPs concerned over freedom to speak out on transgender debate

MPs overwhelmingly back the public’s right not to use someone’s ‘preferred’ pronoun where it contradicts their biological sex, with many also saying they don’t feel they can speak freely on transgenderism, a new survey has revealed.

The objections come as the Government’s consultation on how to make it easier to legally change sex draws to a close this Friday.

In its regular poll of MPs on topical issues, ComRes found that an overwhelming 69 per cent do not think people who refuse to use a transgender person’s ‘preferred’ pronoun should be prosecuted for a hate crime.

A majority of MPs (54 per cent) also said they feel they cannot speak freely about transgender issues for fear of being branded transphobic.

Nearly six in ten MPs (59 per cent) think the sudden rise in children identifying as transgender is worrying, and has not been properly explained or discussed.

Half had been contacted by members of the public concerned about the proposals to make ‘sex changes’ much easier.

The results come as an open letter to the Observer signed by 195 people says the freedom to discuss the proposals is being severely limited, citing “a series of attempts to close down discussion among women about GRA reform”.

The letter detailed a number of instances where meetings to discuss proposed changes to the GRA have been cancelled, academics reported, and women intimidated and even assaulted for questioning the plans.

They said: “We believe the right to discuss proposed changes to the law is fundamental in a democratic society.

“Public authorities, academic institutions, unions and NGOs should be facilitating discussions and protecting the rights of people to take part in them without harassment or intimidation.

“We find it troubling that institutions have not condemned these actions and in some cases have expressed support for them.”

A poll of more than 7,000 Times readers online found that, at the time of publication, 98 per cent think men who identify as women should not be permitted to enter all-female spaces such as toilets, showers, and changing rooms. 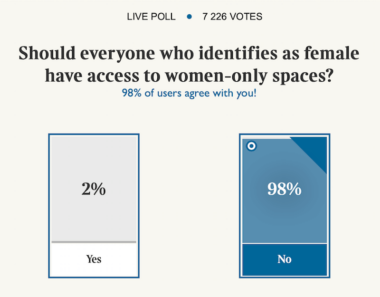 Even more radical plans are being proposed in Scotland, which include potentially allowing children as young as twelve to legally change sex, and that teachers should not tell parents if their children want to ‘change sex’.

However, a poll of more than a thousand Scottish adults suggest the plans are at odds with public opinion.

Almost seven in ten adults said parents should be told if their child changes gender at school, while 57 per cent said parents have a right to be informed about transgender children sharing a room on school trips.

Scottish child welfare expert Maggie Mellon said: “It is time those in authority who have been basking in the approval of trans activists, woke up to the harm they are causing.”