Training given to Merseyside police by trans activist group Mermaids has been ridiculed online.

Pictures of the training were shared on Twitter by an attending police officer, but the content was met with derision.

Mermaids frequently gives training sessions to public bodies and other organisations, claiming it ‘educates’ them about transgenderism.

One slide features a gender identity ‘spectrum’, with a Barbie doll at one end, and a G.I. Joe toy at the other, with women wearing caps and effeminate men in the middle. 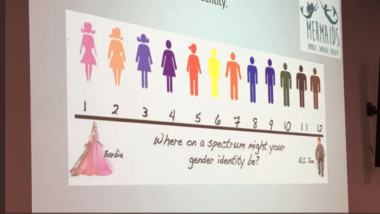 An online commenter asked if this was the same training given to Humberside Police, referencing the case of an officer who “harangued” a man over a ‘transphobic’ tweet.

She recalled the officer announced he had “been on a course & learned about lady-brains being in men’s bodies”, in her opinion “making the whole force a laughing stock”.

On that last slide, to be more feminine I need a smaller waist, bigger breasts, a shorter skirt and longer hair? Am I reading it right?

Still others criticised it as unscientific, and a waste of police time and taxpayer money:

For pity's sake – the police are paying for this Barbie and GI Joe twaddle? Why are the police – a publicly paid for body – using this false science nonsense?

I am curious to know why false science is being taught to police officers. How much did this training cost the public purse? I can't believe that such regressive gender stereotyping is actually being taught. What academic studies back the evidence they present? @GavNewlandsSNP

How much is your force paying for this training? Barbie and GI Joe are not gender identities. You don’t have to act or look like Barbie to be a woman. Are your officers 5 year olds? This is why the public have no faith in the police these days. Absolute joke!

The Christian Institute’s Ciarán Kelly said: “It is deeply troubling to see groups pursuing radical gender ideology being invited to speak to the police.

“They are peddling misinformation which is affecting the ability of police officers to do their jobs correctly and undermining public trust. It is not surprising that so many of the public are questioning why public money is being spent in this way.”

Despite vocal opposition, the National Lottery has decided to grant £500,000 to Mermaids.

When the grant was initially announced, Mermaids was accused of emotionally blackmailing parents into supporting the use of puberty blockers, infertility-causing cross-sex hormones and surgery.

The activist group also wants such medical interventions to be available to children from a younger age. This is despite the lack of research on their long-term impacts and contrary to NHS recommendations.