The LGBT activist and General Synod member Jayne Ozanne has joined forces with members of other faiths in a campaign to challenge biblical teaching on sexual ethics and biological sex.

The Ozanne Foundation’s declaration to affirm and celebrate LGBT practice includes a call to ban “all attempts to change, suppress or erase a person’s sexual orientation, gender identity or gender expression”.

Earlier this year the Foundation urged the Prime Minister to introduce a law covering “the full range of religious practices”, including outlawing calls to sexual abstinence. It also called for the law to prevent trans people who regret changing sex getting help to detransition.

The 310-word statement, called ‘Declaring the Sanctity of Life & Dignity of All’, is being promoted by Global Interfaith Commission for LGBT+ Lives – an initiative of the Ozanne Foundation.

It is supported by David Mayne, the Moderator to the UK Baptist Union Council, and Archbishop of Wales John Davies as well as members of Jewish, Muslim, Hindu and Buddhist groups. 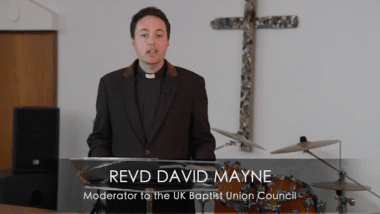 David Mayne featured on the promo video for the declaration

Ozanne recently compared churches and Christians that uphold the Bible’s teaching on sexual ethics to ‘Holocaust deniers’ and ‘rapists’ in an article for homosexual news website Pink News.

She also said that churches or individuals that engage in prayer, private conversation and teaching which does not affirm homosexual or transgender lifestyles “should be held to account and face the full force of the law”.

Former evangelical Steve Chalke tweeted his support for the statement. He added: “Although some religious groups claim this will infringe their freedom, all freedoms end at the point they harm another person”.

Chalke has previously warned churches that they risk “high-profile prosecutions” if they take a biblical stance on sexual ethics and biological sex.

In a press release, Chalke, founder of the Oasis Trust, called it “psychologically abusive” to express pastoral concern or pray for people with unwanted same-sex attraction or gender confusion.

Both Chalke and Ozanne have criticised churches for teaching LGBT people that their desires “are ‘sinful’”. Ozanne called it a “harmful practice” that ‘can’t be allowed to continue’.

The Christian Institute’s Simon Calvert said the latest initiative showed “Some LGBT campaigners are set on obtaining a veto on Christian preaching, prayer and pastoral care”.

“This is an attempt to exploit revulsion over conversion therapy to criminalise evangelical Christianity”.