A woman with locked-in syndrome has written a book using her eyes and chin, to help others living with disability.

Mum Tracey Okines split an artery in her neck while demonstrating a cartwheel for her daughter in 2008. She suffered a stroke which left her paralysed and in a coma for several months.

She has recently published her autobiography, ‘I’m glad you didn’t die Mummy’ – the words her six-year-old daughter spoke to her after the accident.

After waking from the coma, Tracey could only move her eyes.

Her condition has improved very gradually with the help of intensive rehabilitation. She has now regained some movement in her face and neck and is able to use a wheelchair.

Tracey has spent the last six years writing about her experience living with locked-in syndrome.

Initially, she could only write using ‘purposeful eye movements’ and a special colour-coded letter board, but eventually progressed to writing using a chin-operated tablet.

Tracey, said: “When I was diagnosed with ‘locked-in syndrome’ I had never heard of the condition before. I really didn’t know what to expect. I went about researching.

“I found lots of information which was negative and was not applicable to me. I wrote the book so hopefully nobody feels as lost as I did.”

She also said: “For over a decade now I have been living with Locked-in Syndrome. At first I hated it and I wanted to kill myself, but I’m glad that I stayed alive.”

She added: “I found my health improving and I’m now doing things that I never thought I’d be able to do.”

But with his support, and for the sake of her daughter, Tracey found the “will to live”.

Commenting on her book, John said: “Knowing her and knowing how hard it is for her to talk and communicate with people, she’s done unbelievable with it.”

He added: “I can imagine the frustration she must have had with getting it right because it’s not always easy, even with a computer, but she’s very stubborn”.

‘Locked-in’ syndrome leaves people with fully functioning minds but with little or no ability to communicate.

The condition is frequently used by campaigners who want to remove the current protections against assisted suicide in the UK. 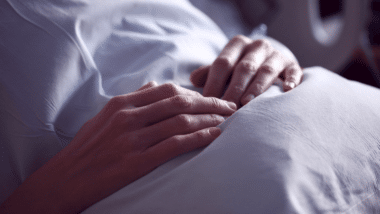