‘I was not expected to last 60 seconds’

A woman born with spina bifida who doctors thought would die shortly after birth recently celebrated her 60th birthday.

Carmel Proctor was diagnosed with myelomeningocele, a severe form of spina bifida, when she was born on 8 August 1960, and she initially struggled with very poor health.

Her parents later told her she was “not expected to last 60 seconds”.

Carmel said: “My mum’s GP was called by her midwife to come see me after I was born at home. She had heard of a doctor at Sheffield Children’s Hospital who was doing some pioneering treatment for patients with spina bifida.

“Two days later, I was in the operating theatre.”

The treatment was successful and she continued to receive medical check-ups until she was sixteen, but she has continued to exceed all expectations placed on her at birth as she reached her new milestone.

To celebrate her 60th birthday she arranged a sponsored fundraising event to support the hospital that cared for her.

Michael Robinson, Director of Communications at the Society for the Protection of Unborn Children, commented that many others diagnosed with the condition do not get the same chance at life as Carmel.

He said: “We wish Carmel many happy returns. But let’s not forget those unborn children whose future is snatched away by abortion because of a disability diagnosis, and who will never have a birthday.

“Many people with disabilities achieve their goals and lead a life of satisfaction and happiness. Each person deserves a chance to live, regardless of ability.”

Care for those with spina bifida has improved significantly since Carmel received her treatment.

In recent years, some babies diagnosed with spina bifida in the womb have been able to have surgery in utero to close the hole around their spine.

One mother recently described her baby’s amazing development after receiving the surgery, calling her an “absolute joy”.

Last year, 3,863 unborn children with a disability were aborted in England and Wales. Of these, 118 were for spina bifida. 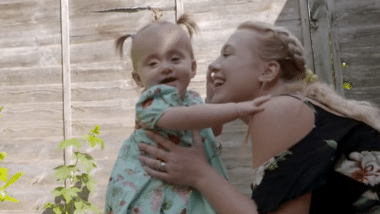 Paralympic legend turned down abortion despite pressure from medics