Abortion on demand up to birth could be legalised in France after the National Assembly gave its approval to a number of radical new amendments.

The legislators voted to allow abortion for mothers that suffer “psycho-social distress”, effectively approving abortion up to birth for any reason, in a late night vote on revising the country’s bioethics law.

Pro-life campaigners expressed their horror at the news of the vote.

Alliance Vita, a French pro-life group, expressed its concern that psycho-social distress is an “unverifiable criterion”, suggesting this opens the door for women to have an abortion for any reason.

Currently around 220,000 legal abortions happen every year in France and campaigners fear the number will increase with the new amendments.

There has also been criticism of the small number of votes for the law. Only 101 members voted on the controversial amendments out of a total of 577 members, with 60 in favour and 37 against.

There were further objections over the lack of time taken to properly assess the Bill. Only 25 hours were given to discussion, while the amendment on artificial procreation was introduced a few hours before the vote on the whole text.

Introducing artificial procreation for single women and lesbian couples was discussed at grassroots consultations last year, but thousands of people protested against the move.

The Bill must now return to the Senate for its second reading there. A modified law would then be voted on by a joint committee of the two houses later this year, but the National Assembly’s decision is final where a consensus cannot be reached. 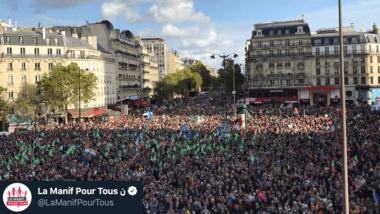