Medics should not show “any bias towards abortion” if they suspect there may be a problem with a pregnancy, the Minister for Care has said.

Helen Whately, Conservative MP for Faversham and Mid Kent, made the remarks during a parliamentary debate to mark Down Syndrome Awareness Month.

In the UK, abortion is permitted up to 24 weeks for most reasons but is available up to birth for children diagnosed with a disability. This includes Down’s syndrome.

During the debate Labour MP Rachael Maskell pointed out that “coming into the world is a real challenge for somebody with Down’s syndrome”.

Whately responded: “it is absolutely the case that if, during pregnancy, any abnormality is detected or suspected there should at no stage be any bias towards abortion”.

However, Jim Shannon MP informed the House that the number of babies born with Down’s syndrome has dropped by 30% in NHS hospitals that have introduced controversial non-invasive pre-natal tests.

He said the situation was “beginning to mirror” countries such as Iceland where almost 100 per cent of babies with Down’s syndrome are aborted, a development Shannon described as “chilling to the core”.

Currently in Great Britain, around 92 per cent of those diagnosed with Down’s syndrome in the womb are aborted.

it is absolutely the case that if, during pregnancy, any abnormality is detected or suspected there should at no stage be any bias towards abortionHelen Whately MP, Minister for Care

Chair of the All-Party Parliamentary Group for Disability Dr Lisa Cameron MP, who secured the debate, said that discussions around Down’s syndrome tend to focus on “difference and limitations rather than talent, skills, ability and contribution”.

She added: “A more comprehensive and accurate narrative needs to be provided.”

Dr Cameron highlighted the stories of “Tom, who lives in London and has two part-time jobs as a barman and catering assistant and is also an award-winning weightlifter; Bethany who works for West Mercia police; and Hayley from Essex, who loves singing and acting and is part of a drama group performing at the London Palladium”.

She concluded: “These few accounts represent the stories of so many: those students with Down’s syndrome who are in college or university; those who have jobs and hobbies; those who are moving home, winning awards, falling in love, getting married and achieving great things.”

Heidi Crowter and fellow campaigner Máire Lea-Wilson have been given permission to challenge the current law on abortion at the High Court.

They argue that the law discriminates against unborn babies with Down’s syndrome.

Heidi told the Christian Institute: “The reason I’m bringing this case is because I am someone who has Down’s syndrome, and I will not tolerate discrimination.”

She called on people to “see the person beyond the extra chromosome”. 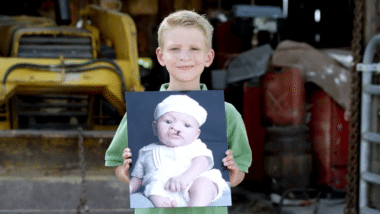