Case dismissed: Challenge to Ashers ruling thrown out by ECtHR

The LGBT campaigner who took Ashers Baking Company to court has had his appeal against the UK Supreme Court’s unanimous decision in favour of the family-run bakery dismissed by the European Court of Human Rights (ECtHR).

Lawyers for Gareth Lee had tried to argue that “his rights were interfered with by a public authority – the Supreme Court – by its decision to dismiss his claim for breach of statutory duty to provide services, and that the interference was not proportionate”.

The case was taken against the UK as a member state of the European Court. The bakery, and the McArthur family who own and run it, were not parties to the action. However, both they and The Christian Institute were given permission to present submissions to the Court. The Court accepted the substance of those submissions.

The Christian Institute supported Ashers throughout its case which ran for four-and-a-half years.

In 2014, it turned down Mr Lee’s order for a same-sex marriage campaign cake. The McArthurs took the decision because the message on the cake conflicted with their Christian belief that marriage is between a man and a woman.

But the taxpayer-funded Equality Commission for Northern Ireland (ECNI) pursued them through the UK courts.

In October 2018, the Supreme Court found in Ashers favour, recognising the family’s objection was “to the message, not to the man”.

In its decision the European Court ruled the application to be “inadmissable” and that Lee was asking the Court “to usurp the role of the domestic courts”. The decision is final.

The ECNI did not back Lee’s appeal. He was represented by same-sex marriage campaigner activist lawyer Ciaran Moynagh of Belfast-based firm Phoenix Law.

Moynagh had claimed the Supreme Court had “created legal uncertainty” with its unanimous decision.

“The UK Supreme Court engaged at length with the human rights arguments in this case and upheld the McArthurs’ rights to freedom of expression and religion. It was disappointing to see another attempt to undermine those rights, so it is a relief that the attempt has failed.

“I’m surprised anyone would want to overturn a ruling that protects gay business owners from being forced to promote views they don’t share, just as much as it protects Christian business owners.”

He continued: “The ruling in October 2018 by five of the country’s most distinguished and experienced judges was welcomed by lawyers, commentators and free speech experts from across the spectrum.

“They all knew of the implications for freedom of speech and religion, had the decision gone against Ashers. This could have included a Muslim printer being forced to print cartoons of Mohammed, or a lesbian-owned bakery being forced to make a cake describing gay marriage as an ‘abomination’.

Ashers Baking Company’s win in the UK Supreme Court over its refusal to bake a cake with the slogan ‘Support Gay Marriage’ was celebrated around the world. 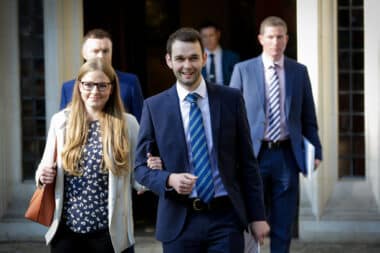