The global harassment, intimidation and violence that Christians face at the hands of extremists is exposed in a new briefing by The Christian Institute.

It uses key statistics, research and reports from around the world to demonstrate why so many Christians are fleeing the land of their birth as their core freedoms are stripped from them.

To coincide with its publication, the Institute called upon the Government to recognise the full extent of the plight of Christians abroad.

As many as 4,344 Christians were confirmed to have been killed because of their faith last year. However, expert estimates put the real figure at closer to 10,000 – and around 200 million Christians in over 60 countries face discrimination or persecution.

In just over two years, massacres of Christians have taken place in Nigeria, Kenya, Pakistan, Libya, Iraq and Syria. 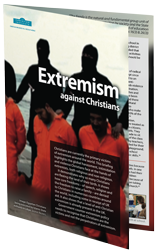 The briefing also highlights that:

Institute Director Colin Hart said: “Our briefing shows in stark terms the anti-Christian nature of much extremism in the world today.

“ISIL isn’t the only group killing Christians – we cannot forget the activities of groups like al-Shabaab and Boko Haram.

“When there is so much confused thinking in Government about counter-extremism, ministers need to remember that Christians are the victims of extremism, not the perpetrators.”

Mr Hart continued: “The UK Government needs to recognise the full extent of the plight of Christians. As Christmas approaches they are still fleeing persecution in Syria and elsewhere.

“The UK needs to stand up for those persecuted for following Christ. This includes questioning whether £2.7 billion of UK taxpayers’ money should continue to be given to regimes where Christians suffer serious persecution.

“This is true not only abroad but also here in the UK where we know Muslims who convert to Christianity can experience serious harassment and violence.

“The recent terrible beating of Nissar Hussain in Bradford – who left Islam and became a Christian – was a shocking reminder of this.”