There is a common misconception that life with Down’s syndrome is grim and unrewarding – for the parents, any siblings, and for the child.

Expectant mothers have been told that their unborn child will have a short, difficult life, and that it would be better all-round if that baby did not exist.

But ‘Amber and Me’, a new film released on 21 March for World Down’s Syndrome Day, shows that nothing could be further from the truth.

It’s the story of Amber Davies – who has the condition – and her twin sister Olivia or ‘Liv’ – who doesn’t – and the challenges they face during four years together from the start of ‘big school’ aged five.

The hour-long documentary is an understated fly-on-the-wall feature which provides a glimpse of how a child with Down’s syndrome can have a completely normal life; full of joy, laughter and fun.

Yet it does not shy away from showing some of the struggles that Amber’s condition presents both her and her family. There is no narrative, no presenter, just a revealing depiction of the life of Amber and her family. This is life with Down’s syndrome.

At the outset, it is difficult to pinpoint any meaningful differences between Amber and the other girls of her age. At school, she participates in lessons, enjoys playtime, and gets frustrated with homework. At home, she and Olivia play together: whether fantasising about royal weddings, jumping on their trampoline, or baking.

‘Beautiful potential of every child’

There are so many heart-warming moments. Perhaps none more so than the candid moments between Amber and her dad as they play at her ‘market stall’. You cannot help but laugh when she charges her incredulous father £5 for a single tomato, or when she suggests a leek is an excellent birthday present for a young girl.

But these moments also show the difficulties Amber faces too. She struggles to find a small cake prominently placed on a shelf behind her. Her father patiently explains over and over where it is. She is on the cusp of understanding, but something eludes her.

This is life with Down’s syndrome.

Similar frustrations begin to manifest at school. Amber struggles with reading and numbers. She is behind, and she knows it. Both Olivia and older brother Finn assist with her homework. They are a big help, but as the developmental gap grows, Amber cannot help but withdraw into herself, pushing her friends, her father, and even her sister away.

For a girl of such a tender age, this is at times too great an emotional burden to bear

Olivia takes this hard. As a twin, she has always felt close to Amber, but they appear to be growing apart. In her efforts to tutor Amber, she attempts to keep them close, and she feels responsible for her sister’s mental development. For a girl of such a tender age, this is at times too great an emotional burden to bear.

Things are exacerbated as other children begin to bully Amber for being different, and she tries to get sent home from school because she no longer enjoys it. Perhaps the myths about Down’s syndrome might not be myths after all?

No so, as this film again puts those perceptions to the sword. Like all families, yes, there are hard times; yes, there are struggles. But the dark times do not last forever.

It’s a wonderful film, lovingly made by the twins’ father and dedicated to “Amber, Liv and Finn, and the beautiful potential of every child”.

And it leaves us with the sense that Amber’s life, and her family, are wonderful too. She has all the trials, tribulations and tantrums of any other girl her age, but she has all the joy and all the love too.

Amber and Me will be screened in limited cinemas, and can be viewed online from 21 March. 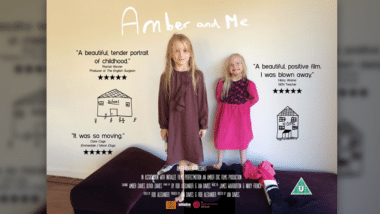 Down’s syndrome and the law

Disability campaigners such as Heidi Crowter, who has the condition, say this is discriminatory and have sought to change the law, and there is currently a Bill being considered by the Northern Ireland Assembly which would outlaw such abortions.

It has just passed its second stage and has moved a step closer to becoming law and giving people with Down’s syndrome the right and proper protections.

Founded on the rock